It has been a while, a long while. I have been busy with my car accident (that sucks) and everything that comes after that (which, onces you were so lucky to come out well from the crash, seems to suck even more :)).

Recently the guys of the Regional Environmental Agency of the Italian Region Piemont (ARPA Piemonte) contracted HydroloGIS to make several bugfixes and several big enhancements on BeeGIS since they want to use it for their digital field mapping (which is AWESOME!!).

Well, I won't make a list of the things that will be done now, but I want to show you the first nice thing that is getting from that: The database manager. Since BeeGIS works with embedded databases (it can also with remote, but out in the field you might be offline) you often have the need to switch between databases and quickly create new ones, export them and do whatever you want with them.
That is what the tool is there for. 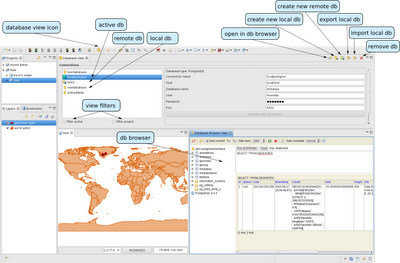 A first of several nice features. Thanks ARPA...

Posted by moovida at 6:25 PM No comments: