I was asked to investigate a geopaparazzi port on Trimble Juno SC. Well, obviously it is not Android. But not only that, it is also not open source at all. In fact it is one of the closest source situations I have been in many years. Anyways, while investigating all the .Net and C# and gps apis, I also gave a look at a project I fell in love with long time ago, but never really had the possibility to try: eRCP.

To be honest the project looked quite dead and it took me a really long time to figure out the current way to do things best.

The best thing right now is to download the Pulsar eclipse IDE project
and install the ERCP SDK through the update site, which now is: http://www.eclipse.org/ercp/pulsar. At that point the sdk is installed.

First thing I wanted to run the demo codes, that can be found in the ercp cvs at dev.eclipse.org.

Obviously you want to run them on the mobile devide. Ok, that was trickier.

First thing you need to upload top the device (let's say in the root folder) the eRCP folder that can be found inside the windows mobile runtime downloaded before. That one contains also the example runner files.

The few examples found all make use of the J9 IBM environment to run the eRCP demos. Well, that one is not open source and also not free right now. But it seemed the only possible way to go. I tried to use the J9 bundle that gvSig mobile is using but was not successful. Being in need to really know if eRCP is a way to go, I finally decided to buy the J9 environment (I hate to buy things when I don't even know if I will ever need them!). Once bought, I installed it on the Juno and was looking forward to see the examples work.

Well, that also didn't happen. The launcher crashed and I was getting more and more frustrated. But I spent money and now it HAD to work. So I started to search for solutions for the J9 crashes.

That was the moment when the following two blog posts came in my way:
Phoneme advanced and eSWT Running Under x86 Windows
Running eRCP with Phoneme Advanced on your mobile phone

This man, apart of writing amazing posts, made me feel stupid for having bought something I didn't want (I deserve it), but also really solved my issues.

From the phoneme I donwloaded the right cab, uploaded it to the juno and installed it.

I then had to change the launcher links of the examples a bit from:

And it finally worked!! Being an RCP developer for the uDig project I really love the eRCP approach. Now I just have to understand how to take pictures in windows mobile from eRCP and then I am really happy.

I hope this can help someone else to don't lose maoney and time in trying just to make some demo code run.

Posted by moovida at 8:33 PM No comments:

On your marks, get set... spatial toolbox on the line

Doing the last piece of migration JGrass into uDig, i.e. the Spatial Toolbox (aka. OmsBox) has been a lot of pain. One of those things in which the last 2% cost you almost as much as the 98% before.
We have been using the toolbox in testing now almost half a year now and finally today the last bits have been placed in the proper locations:

* the PSC has reviewed and accepted my plugin
* the code is inside the main uDig repository
* the libraries needed have been sorted out
* a new release of jgrasstools has been made to be aligned with the uDig libs (0.7.1)

* the uDig help page that is required by the heavy metal Jody Garnett reviewer (thanks for helping) is also there. It can be found here.

Tomorrow we should be able to tag a snapshot release and on tuesday we should have the release ready for the Osgeo DVD. I think I will soon sleep much better... 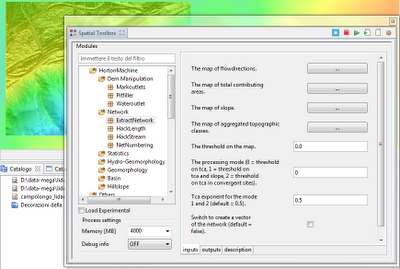 Posted by moovida at 6:09 PM No comments: