RXTX and the funky PortInUseException on Macosx

I am using the RXTX serial libs for getting data out of my gps. They always worked nice, but the first time I tried them on Macosx they didn't work, throwing this ugly:

I was pretty helpless. Then I found in some mailinglist archive the solution. To cite the guy that solved my problem: "As I've discovered the PortInUseException rarely has anything to do the port being in use.
Nothing to add, tried it and it worked.

Posted by moovida at 7:40 PM 20 comments: Links to this post

Email ThisBlogThis!Share to TwitterShare to FacebookShare to Pinterest
Labels: macosx

I am following this thread in the osgeo list: Can I do the same GIS tasks with OS (as with ESRI)?

Paul Ramsey states and I would not find better words:
"I think it's contingent on us as evangelizers to not over-sell. I would not recommend QGIS or any other open source desktop to someone whose prior experience was Arc* until I had a clear understanding of the use case."

The truth is that too often we tend to oversell (I guess because we have too much passion for what we do), giving people the right reason to complain about open source software.
Posted by moovida at 5:33 PM No comments: Links to this post

What is going on with case sensitivity on *nix systems?

I think I'm going mad (due to my ignorance, since I guess this is known...)!!

On my macosx I made I typo in trying to enter a folder (note that USers doesn't exist):

But hey, I could enter:

So to be sure I didn't do anything nasty in the past, as for example renaming my home folder (which is impossible) or relink it.. or ... or aliens came to take me:

Works also... so is the filesystem case sensitive or not?
Posted by moovida at 10:05 AM 4 comments: Links to this post

Email ThisBlogThis!Share to TwitterShare to FacebookShare to Pinterest
Labels: macosx

Since some discussion has been done around groovy in the udig list lately, and since I traveled a lot by train lately, I found the time to dive into the Groovy language.

My God, did I like what I read!!
I will probably never script again in bash, whenever I am allowed to choose!!

And the fact that java and groovy can coexist!! And pointers on methods!! And... and... and...
Well, I wrote down some starter code for those that do not know groovy. Just to have a look.


And note that the above works as a compiled class as well as a command-line script!!
Posted by moovida at 12:38 AM 2 comments: Links to this post

Back from EGU, history repeats, the new bel paese

Back from EGU, back from Vienna... Berlusconi is back... but we knew it all before, as stated already back in the 1995 in the The Globalization Trap: The 20-80 Society, by H.P. Martin and H. Schuhmann:


The pragmatists in the Fairmont Hotel reduce the future to a pair of numbers and a term: "20 to 80" and "tittytainment".

20 percent of the working age population will be enough in the coming century to keep the world economy going. "More workers will not be needed", said magnate Washington SyCip. A fifth of all jobseekers will be enough to produce all the goods and perform all the top-flight services that the world society can afford. This 20 percent will actively participate in living, earning and consuming. One or two percent may be added, the discussants admit, perhaps wealthy heirs.

What about the others? Will 80 percent of those willing to work be without a job? "Certainly", says the US author Jeremy Rifkin, author of the book "The End of Work". "80 percent will have enormous problems." Sun manager Gage puts some more coal on the fire and appeals to his boss Scott McNealy: The question in the future will be "to have lunch or be lunch", to eat or be devoured.

[...]
The term "tittytainment" makes the rounds. This term was coined by the old war-horse Zbigniew Brzezinski. The native Pole, National Security advisor of US president Jimmy Carter, has been occupied with geo-strategic questions. "Tittytainment", Brzezinski explains, is a combination of "entertainment" and "tits", the American slang for bosoms. Brzezinski thinks more of the milk streaming from the breast of a nursing mother than of sex. The frustrated population of the world could be kept happy with as mixture of numbing entertainment and adequate food.

For the following, strictly Italy-related, I could not find a proper translation:


So were the hell did we learn from our history?!?

Here more or less the full list of things to do. More or less is due to the fact that I assume you already know the JGrass or at least the Udig or at very least the Eclipse RCP development environment. Also some sort of OpenMI knowledge should be here. All in all I'm not sure how many will find this useful. Hmmm... I'm sure at least one of the chapters could be.
Why I'm doing this? Because next week I have to present a whole bunch of the JGrass stuff at the EGU and I need some docu. Enjoy :)

My example will treat an OpenMI based model, i.e. h.pitfiller.

Create such a MACAD and implement the needed methods.

2) Tell the console engine that the new model is there

In the list of available MACADs add your new model, so that the engine knows that your MACAD exists.
The line looks like the selected in the image below: 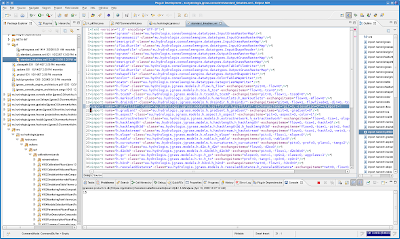 which basically tells us what the model's name and class are.
Also information is given about the arms the MACAD has. In this case 2 arm, which define the input elevation map and the output depitted map.

Create a file with the same name of the MACAD and xml extention and fill it with the following: 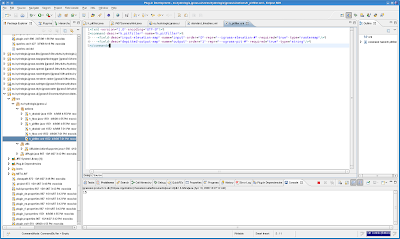 When ok is pressed, the widget creates a command string build by the name of the command tag and the repr of the fileds tags, substituting the # with the user input:
h.pitfiller --igrass-elevation userinput --ograss-pit userinput


4) create an rcp action to launch the command

Once the gui definition is there, we need something to trigger the action.

Eclipse RCP's actionset comes to help us. I create a plugin inside which I keep all the gui for console commands and create an action. In the below image you can see the whole context with adifferent menus and action groups. 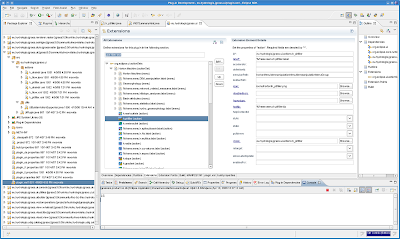 Please note the textfield class, inside which I put: eu.hydrologis.jgrass.ui.actions.h_pitfiller

The class MUST have the same name as the MACAD you want to create!
Let's create the class by clicking over the hyperlinked text class which will create the action class with all the needed implementation of interfaces and methods. 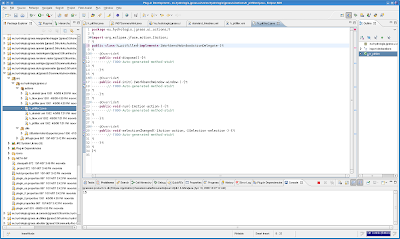 And now the same class with the needed changes: 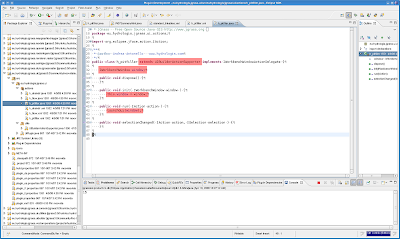 Apply the same changes and that is all. If you didn't do so, put the xml gui definition file inside the same package as the action class. Take a look at the screenshot above to see how it should look inside of the actions package.

Launch JGrass and search in the menu bar your new item. In my case there are a lot, as I already have a whole bunch of organised MACADs in my configuration. However, here I go with pitfiller: 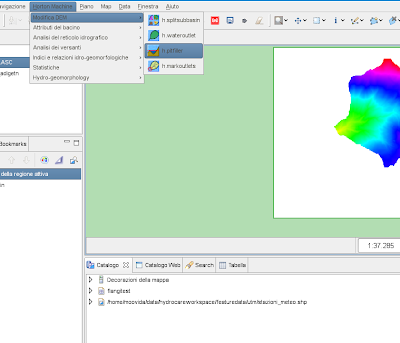 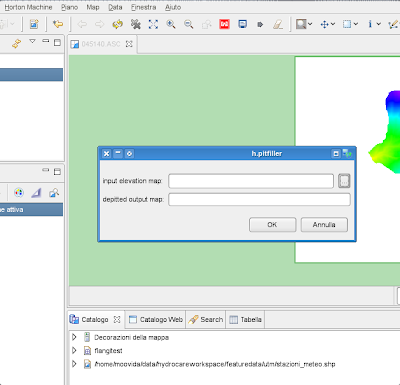 The uibuilder creates the commandline representation of the command line execution.
After that the command is passed to the console engine and a backtrace console window is attached to the process in order to deal with output and errormessages.

So the running h.pitfiller command looks like the following: 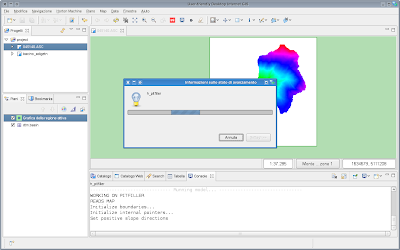 The same could have been done with any GRASS command, apart of the fact that you will not need to create the MACAD yourself :)

Alright, so let's see how to do the same with r.in.gdal, the GRASS native high power raster data import tool.

What you have to do different from before, is that when you create the action class, you need to tell the execution facility class that it is a GRASS command: 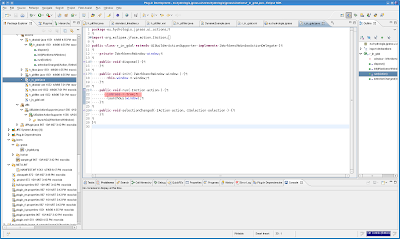 Create the xml file with the options you need:

and fully enjoy your new command: 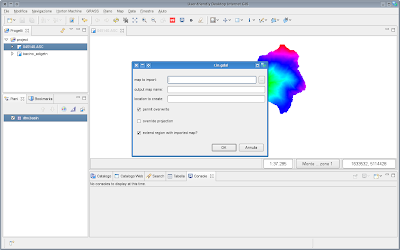 Posted by moovida at 10:47 AM No comments: Links to this post

I have to quote this! As Mr. Jody Garnett states in a mail to the geotools list:

Jody: "SLD makes maps pretty, LSD makes maps sit up and talk to you"
Posted by moovida at 8:53 AM No comments: Links to this post