The form editor - work in progress

I want to give a small preview of what the new form editor for creating dynamic and flexible forms in BeeGIS will look like. On one hand because it is coming quite nice and on the other to show to those that pay us on this (ARPA Piemonte) that we are getting closer.

Well, what would a form editor be? A tool to create forms to make surveying easier and also more standard. Once a form is defined for a certain shapefile, attributes of the features in the file can be modified in the same way by everyone through the form. I do not want to describe further here, that will be a task for the manual writers.

Let's see where we are now.

The "form language" has been defined on an xml base, so a file that looks like that 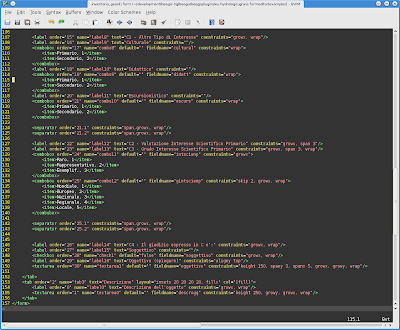 will produce a graphcial interface for feature editing like this one 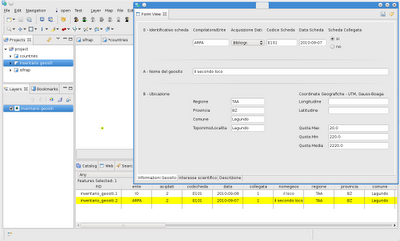 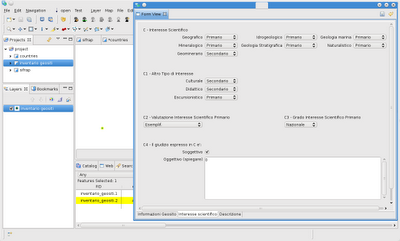 Comboboxes can be described in a human readable way, while they modify the attributes with codes: 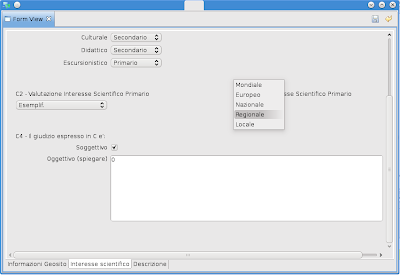 Well, yes, who would write such an xml to get a complex form? How long would it take. It took me about 2 hours to create the one I am showing here, but do not despair, we won't let users alone.

In fact there is also a form editor in progress that will make the generation of form files easy.

I will make the huge error to show you what it will more or less look like, but I also warn you that this is just a first draft prototype, things might change at least a bit. 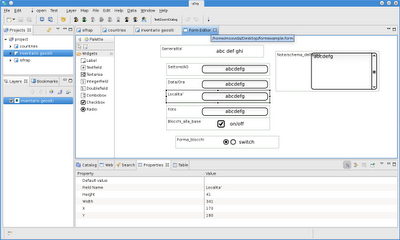 Email ThisBlogThis!Share to TwitterShare to FacebookShare to Pinterest
Labels: beegis

Today we finally released the first version of Geopaparazzi on the android market. The project is released under GPLv3 an available on the homepage of the project.

Geopaparazzi is a tool developed to supprot very fast qualitative engineering/geologic surveys. It integrates completely with the BeeGIS digital tablet extentions, i.e. the data are imported straight into the GIS from the phone for further processing. See this link for an example.

Geopaparazzi is sold on the Android market and supports the development of Geopaprazzi itself as well as the projects developed by the same team: JGrass, JGrassTools and BeeGIS.

That said, I leave you to the documentation on the main website.
Posted by moovida at 12:07 PM No comments:

Distributing 'em around: hg and git

Well, well, finally it seems that we are all moving to distributed versioning systems...

Guess this is it, quite evenly distributed between git and mercurial.
Posted by moovida at 9:55 AM No comments: