JGrass and its sick community...

Today I closed 2 of the 3 active mailinglists of JGrass.
What a horrible feeling... it is now about 10 years I develop for FOSS software and never had to act like this.

But not killing them would kill us... so let's see if users will make the effort to keep at least the jgrass-users list alive. I really hope that converging efforts into on single list might do better.
The developers have been redirected to the udig developers list, since many of the questions were anyway related to udig core.

JGrass has always been a small kid with a lot of problems and an incredible difficulty to gather friends. This is due to it's nature and some dynamics I don't understand even now.

JGrass is a scientific based tool, that also wants to be a full powered desktop GIS. So what?

Let me think out loud and write down some comments:

With JGrass you can do complete hydrological risk studies, from the begin to the end of the study JGrass has all the tools. These tools are mainly useful to Engineers and Geologists. The problem is that most of those do a hydrological study once a year. Which means that at that time they come into the list, ask newbie questions and get help to do the job. Then for the rest of the year they disappear, since they have something else to do. When a "JGrass-job" comes again, here they come again, with almost the same questions, since JGrass evolved and no one was paying attention. Quite frustrating being always in need of founding to develop JGrass and having to help people doing their jobs for free.

Differently from other hydro-morphological toolkits, JGrass contains some heavy models and it is not possible to think it as a library. Instead we need a friendly yet powerful environment to get things rolling at the last state of art of technology.
Luckily we found that framework in uDig and we are glad of the migration we did every day since then. In fact, JGrass right now is at one of its best moments and quickly evolving (which makes me even more sad right now).

HydroloGIS is not able to be the only developer, the only release maintainer, the only docs writer, the only mailinglist answerer, and so on... Therefore the decision to cut away something. And what would that something be? Sad to say, but the only thing that we as HydroloGIS do not need and that we initially set up only for the community... a community that even now doesn't get what they are losing.

I am not telling it is not my fault. It probably is in some way. I am instead telling that I want to make things better. If I have time I want to spend it on developing, making better releases and write some documentation... not on newbie questions that other users would be able to answer.

Netcdf will get into JGrass with arrows

My summer of code project is proceeding.

Not to much to say here, just a link to some news and a mandatory screenshot: 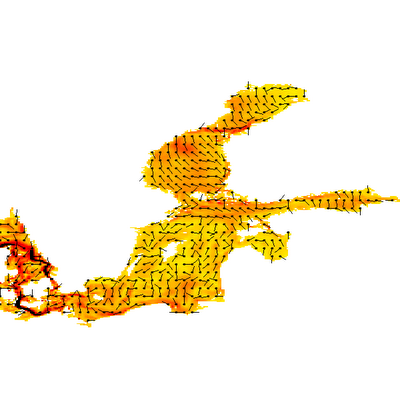 Alright, today we tested GeoPaparazzi for the first time in field.

The tool is funny and easy to use. My battery lasted the morning and then was finished. But I guess that is ok, since it had to log the gps and took many pictures and many notes.

Alright, before I have no time to do it, I want to show the use as companion of BeeGIS.

So I connect my HTC Dream via USB to my Ubuntu box. The phone asks me if I want to mount it as disk. I say yes and I get the following: 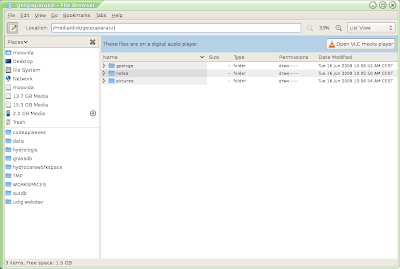 Note that GeoPaparazzi creates a folder geopaparazzi at the root of your sdcard.

Ok, then I start up BeeGIS and enter the File->Import dialog and find the Import GeoPaparazzi Data Folder item: 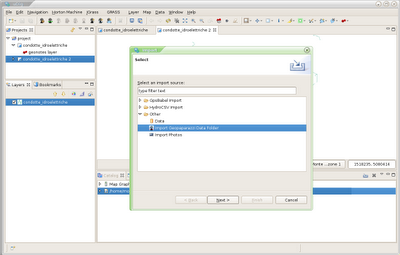 The next asks me for the geopaprazzi root folder and the processed items folder: 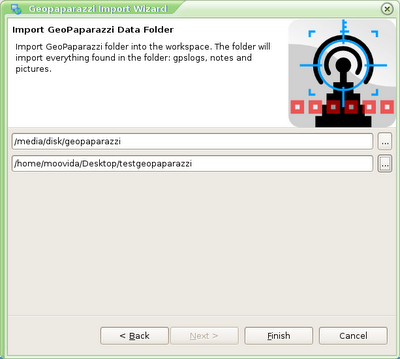 Once pushed finish, everything found inside the data folder will be imported as follows. I will explain how later. Images import is still not there, since I have some parts to fix first. Therefore the import will bring notes into a shapfile and the gpslog into both a lines shapefile and a points shapefile: 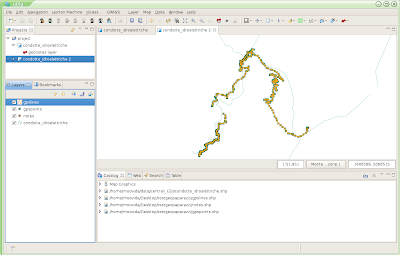 The NOTES shapefile is created with a TIMESTAMP and DESCRIPTION field: 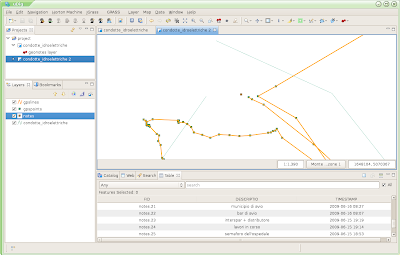 The GPSLOG LINES shapefile is created with a STARTDATE and ENDDATE field: 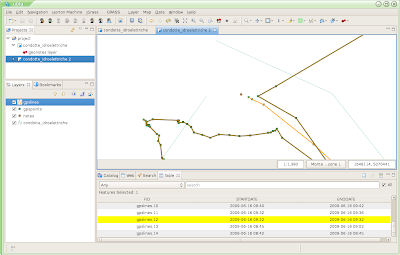 And finally the GPSLOG POINTS shapefile is created with an ALTIMETRY and DATE field: 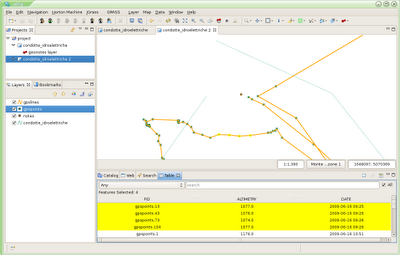 That's it for now, coming back soon with the orientated pictures part.
Posted by moovida at 4:52 PM 3 comments:

GeoParazzi enables your android phone to do digital field mapping.

You can find some screenshot at the project page: http://www.geopaparazzi.eu

Now the BeeGIS part has to be done in order to import the collected data... but that one should be really easy.
Posted by moovida at 6:13 PM No comments:

Since I am not sure if people reading here are aware of the udig blog, I will link from here to the first small even announcement: