Well, it had to come finally. The version 2 of Geopaparazzi is finally in the market. Not much more to say more than I did already in the last posts.

Just to summarize a bit:


The documentation entry page is here.


With this release we also decided to release the old version for free in the market, so if you search for geopaparazzi or geopaparazzi 1, the free version should appear ready to be installed.


That said, Season Greetings to everyone. I hope you all had a nice Xmas and are heading to an amazing new year's eve!!

Posted by moovida at 1:28 PM 6 comments: Links to this post

It is Xmas and I just finished to write the manual for the Geopaparazzi 2.0 version.

For those that want to browse a bit the new fucntionalities waiting for the release,
here it is.

Well, I am shutting down everything and head to the Xmas Market to warm up my spirit with some mulled wine to properly prepare for the evening.

Happy Xmas to everyone!!
Posted by moovida at 12:52 PM No comments: Links to this post

Email ThisBlogThis!Share to TwitterShare to FacebookShare to Pinterest
Labels: geopaparazzi

This year's Xmas gift is a complete change of geopaparazzi's usability and several new features.
This forced us to get out a 2 version, but well, I hope we will be sticking on that one for a long long while.

A couple of preview shots: 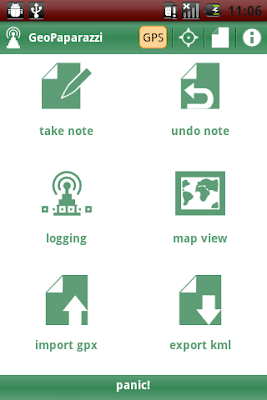 There are now those small wonderthings that make me hot on stylish mobile apps. 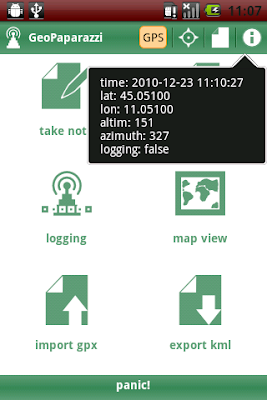 There is one single button for notes. Once touched, it presents all 3 options: 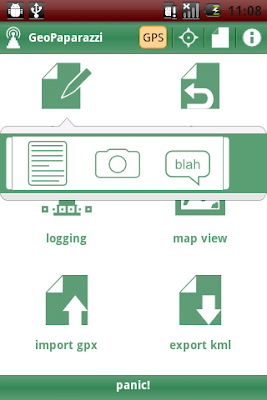 The logging has now a safer way to turn loggin on and off: 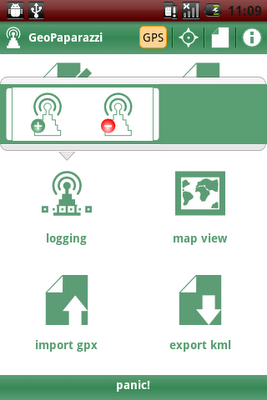 As I said before, the action bar is now available also in the map view, which also got added the center on gps button: 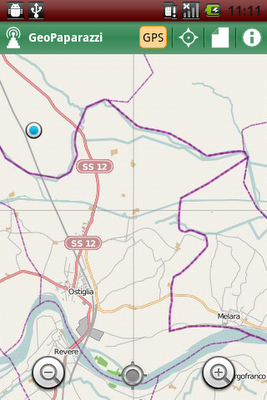 And yes, also notes of different types can be taken from here: 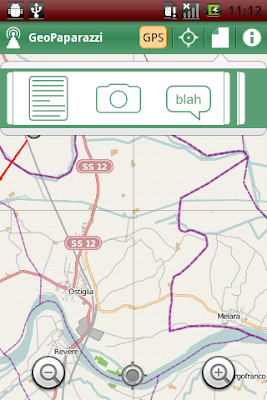 But the most (or second most) amazing news here is the support for structured notes. It is possible to describe buttons and forms through json files, that then generate the needed guis for the creation of notes: 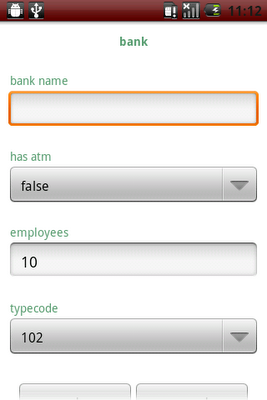 And that one is really something I like :)
The kml export now exports those notes embedding tables inside the notes itself. This leads to extremly nice results of superfast surveys.
On the BeeGIS import side we still have to work a bit to see how to handle those. One idea is to create shapefiles containing the form fields as attribute table. The doors are open. 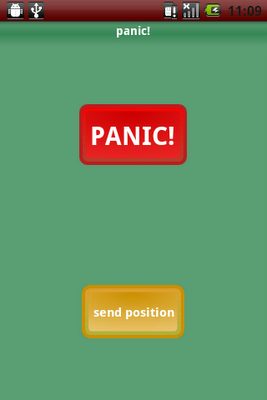 I really wanted to get this out today, but we need to do more testing and ask the translators for their updates. Will be out as soon as possible!!
Posted by moovida at 2:15 PM 2 comments: Links to this post

Email ThisBlogThis!Share to TwitterShare to FacebookShare to Pinterest
Labels: geopaparazzi

With the jgrasstools effort we also are abstracting the whole raster formats, which before was just the GRASS binary raster format, to be whatever a geotools GridCoverage can be. This is/will make it easy to anyone to run the processing algorithms on any geotiff the same way as on en ESRI ascii grid.

Taking a bit the distance from the GRASS location and mapset concept was one of the things that we thought would help us a bit, since we are often in the middle of two worlds, between userfriendlyness seeking users and in-assembly-thinking academics. :)

Well, as stated at the begin, we chose to be able to use the jgrasstools on any raster format directly.

At our last JGrass course however we figured out that some users will simply make incredible mistakes without any guiding hand, speak: without locking them into a geographically well defined workspace, inside which they at least do not screw up the projection information.

And that is the GRASS location. As akward it is always for the users to first understand the purpose and meaning of location and mapset, it afterwards might save their lives.

So we made a new try. Which is to create a bunch of small tools that would help people get in and out of a GRASS location, as if it was a folder somewhere on the system.
Tools to handle a bit automagically the active region concept.
Tools that would help users to get started with the hated geotiff that they got from their local administration.

So the most important bit is probably the fact that now we can create a Location and mapset directly from an input file: 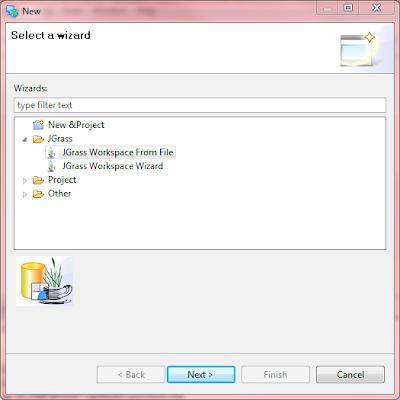 This right now supports geotiffs and esri ascii grids that have information about the projection they are in (prj file mostly). Set file and names for the location and mapset and you are ready to start: 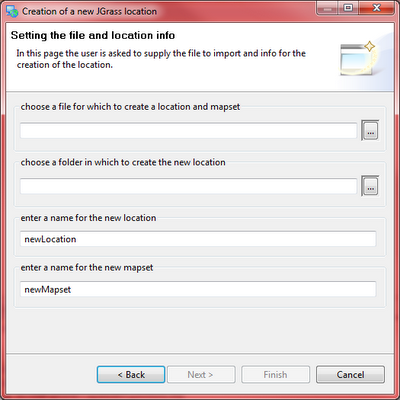 The active region has been made a bit more responsive to what happenes. On the left upper side it shows you permanently to what location and mapset it is referring to, so that no user can be confused again about which mapset it is using for processing: 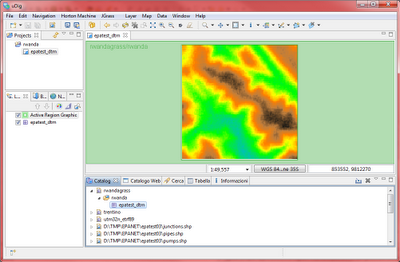 The catalog JGrass service has been empowered: 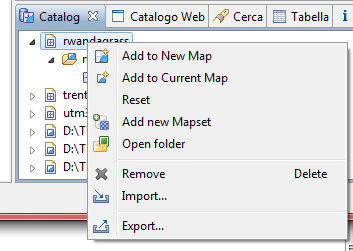 By rightclicking on the location you now can:
* open the system filebrowser on the location. This is particuary handy when you want to rename a mapset for example
* add a new mapset to the selected location

The same applies for the mapsets: 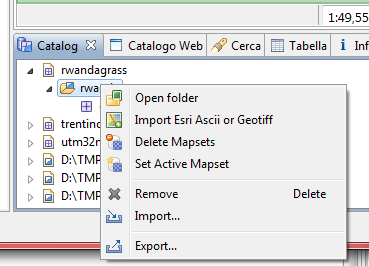 By rightclicking on a mapset you now can:
* same as for the location open the mapset folder with your system file browser
* import dirctly into the mapset an esrii ascii or a geotiff. Files in different projection than the mapset will be reprojected on their way in
* delete a mapset from the location
* set the selected mapset as the active one for all processing done. The active region for this mapset will be shown to highlight the processing region that will be used. This had to be done in the settings before.


And finally we have the map actions: 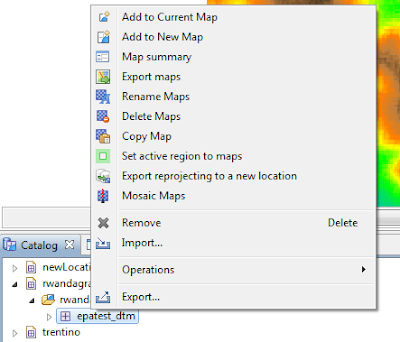 From here you can:
* trigger a map summary for a quick statistic on the selected raster
* export maps (also multiple in one go) directly to esri ascii grid and geotiffs
* rename maps
* remove maps
* copy a map on the active region. This is usually usefull, since at the begin the user will ave a DTM of a larger area than the one to study. Once defined the area of interest, simply select with the active region bbox selector that smaller area and copy the map. It will be cut on the active region
* set the active region to te selected raster map. If more than one map is selected, the active region will be expanded to contain them all
* reproject a map by directly creating a new location and/or mapset
* mosaci maps, i.e. patch them together. If you have 4 maps that contain parts of your area of interest (following Murphys law, it will be placed in the corner of all four), you probably want to first patch the maps and then extract the smaller region of interest


I guess that's it. While I believe that some of you reading this will think: how the hell should this be usefull? others will definitely count the time to get the next release of uDig. Because yes, most of the above is in uDig, even without JGrass extentions. Not that you would do much from here on with a raster and without JGrass :)


-----
update: had to change the map actions screenshot, since I was forgetting the mapreprojection to new location
Posted by moovida at 4:41 PM 2 comments: Links to this post