The version 4.4.0 of Geopaparazzi has been pushed to Google Play.


The main news for this release is for sure the first inclusion of RasterLite2, the spatialite raster support, in the release. This makes geopaparazzi 3Mb heavier but it is worth the price.


RasterLite2 is not yet in stable phase, but it is already good to play with. A first stable release should be out by begin of the next year.


For this kudos go to Mark Johnson, that took care of making this possible.


It is also Mark to supply this beatiful map of Berlin in RasterLite2 format: 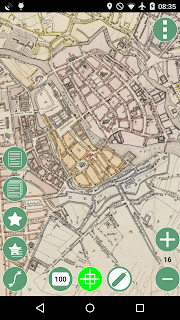 A RL2 database can contain more than one map, so a review of the tile source tree has been necessary. The RL2 database is represented as folder: 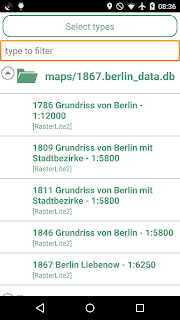 And also the filter-by-type buttons had to be changed because of space issues: 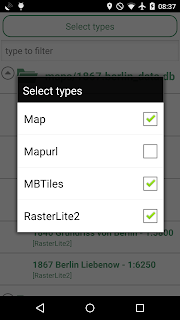 But good thing is, they now remember the last used setting.


2) view the position coordinate when panning

This is a small one, but handy to many. An image explains it all: 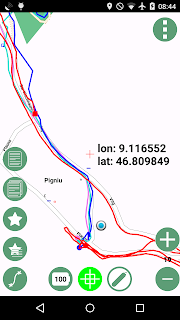 3) and last but not least, a better center on GPS button and better GPS status on the map

This has been asked a couple of times in the list, so we thought it might be best to put them together.

Can you tell the difference? 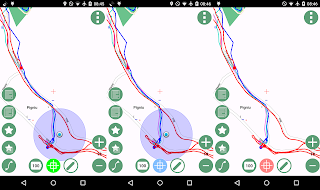 That should be the most important changes for this release!
Enjoy!!

In 2011, driven by the need to better understand how to make GPL and uDig work together, I wrote an open letter to the Eclipse Foundation and the Free Software Foundation. I collected thoughts and results in the wiki of JGrass. Recently I had to migrate it and found this again. I want to keep it here for reference... and maybe it is also usefull to others.

Mind that this is pretty much a copy/paste of the original wiki page.

This wiki page contains informations, email exchanges and useful links regarding the possibility to mix and distribute code licensed under the GPL and the EPL.

To gain better understanding of the GPL-EPL compatibility problem, we wrote the following open letter to the Eclipse Foundationd and the FSF.

My name is Andrea Antonello and I am an active member of the free and open source software (from now on FOSS) community for years now. I am member of the Open Source Geospatial Foundation (www.osgeo.org) and active developer and steering comittee member in a couple of FOSS GIS projects based on the eclipse rcp (from now on RCP).

For better understanding of the usecases I will ask you clarification of, let me give some introductory explanation.

It is clear that this situation has no issues, since EPL and LGPL are compatible licenses.

I should mention that in the following cases GPL refers to the GPL version 3.

JGrass is a highly scientific project, and as such it has difficulties in exploiting the real power of FOSS, since many scientific project that JGrass could use or connect to are released under general public license (from now on GPL).

This is the reason for which the JGrass team would like to release its plugins under the GPL license.
Given the incompatibility of EPL and GPL, many discussions were raised which lead to lot of confusion and potential border cases that may harm both the project's community and the involved commercial partners.

This letter is meant to request some clarification once and for all by proposing a couple of use cases of development and deployment of the above mentioned applications. I apologize in advance for  having inserted some obviously incompatible cases. The reason for this is that I would like to create a document for the above communities (and not only) to give more clearness and to assure many community members that have had problems with freeing their code to the above RCP based projects.

Of the following 5 use cases, the first 4 all assume the following:
I write a simple rcp plugin (from now on called MYPLUGIN) to be used for uDig (for example like explained here). Developed in such a way the plugin contains imports of libraries from both the RCP:
and uDig:


It is important to note that the MYPLUGIN contains only plugin specific code, which relies on implementations that reside in the referenced packages
and are present in the target environment (uDig or RCP).

To be clear, in this case import is meant really as the java statement to declare which packages of external libraries shall be used by MYPLUGIN.

Use case one: writing a RCP based plugin and releasing it under GPL

I license MYPLUGIN under GPL, create a small jar archive of MYPLUGIN, put it on a website with installation instructions for putting it into uDig.

Use case two: writing a RCP based plugin, releasing it under GPL and deploy it as an application

I license MYPLUGIN under GPL, package it with the uDig application, which I brand and bundle in one ready-to-use installer. I then put it on a website where users can download and use it.

Use case three: writing a RCP based plugin, releasing it under GPL and install it as an application for a customer

I license MYPLUGIN under GPL and put it on a website as in use case one.

Assuming I wrote MYPLUGIN for a customer,  which of the following options are legal?

Use case four: writing a RCP based plugin, releasing it under GPL and making it available via the eclipse rcp update site engine

I license MYPLUGIN under GPL.

I want to use the RCP's own installation manager to make MYPLUGIN available to both community and customers.


The following use case is a bit different from the above ones.

I want to develop a library based on the framework. Since through the uDig and RCP development I am very bound to the eclipse RCP, I decide to use the  Equinox framework to create the plugins that compose my library (instead of for example Apache Felix, which would have compatible license).

The library I produce will therefore contain imports of the equinox framework.

Which of the below can I do?


I feel that there is much confusion on the user's part when it comes to certain licenses. The EPL and GPL mixture is a real headache and still I'm not able to find someone that would assure me regarding this topic.

This letter is born of the opinion that a FOSS project comittee has to be able to give clear information about what can and cannot be done to potential developers and investors of the project.


Thanks in advance for the clarifications that the Free Software Foundation can give us.

on behalf of at least:

Through the below letter we got several email exchanges directly with the Executive Director of the Eclipse Foundation, Mike Milinkovich, who was very helpful in getting a good picture of what the problems are.

At the time of sending my email, Eclipse Foundation and FSF were discussing the GPL/EPL issue, so I didn't get a direct answer to the questions in the open letter, but now there is a public answer about the issues available:

Here the point of view of the Eclipse Foundation can be found.

And here the public statement of the FSF.

After long discussions we think that the following applies: