Geopaparazzi 3.4.0 is out! Please welcome the Spatialite brothers... and NFC support

At the begin of November Sandro Furieri, known for being the father of the Spatialite project (but also known for being our very personal presidential Fury of the Italian GFOSS association), wrote me an email about a release of spatialite for android.

Well, I was in a real busy moment and struggeling with the preparation of the presentation of the upcoming GFOSS day, the Osgeo Italian chapter gathering of the tribes.

Since I was doing a presentation about a history of the mobile trend, particularly related to Android and GFOSS software, I had to do something. So I spent soem night to integrate spatialite in geopaparazzi. Well, during the presentation I gave at the conference:

I only showed a small joke screenshot, where geopaparazzi was dialoging with Fury to do some transformations (see slide 50).

But from that moment I could not stop to think about a raster+vector format for data exchange between different operating systems and devices.

With Spatialite it would be possible to finally overlay not only points and simple lines, but also polygons and large datasets. The spatial index would help, i knew it would.

So we started to implement a new layer in geopaparazzi: the spatialite dataset layer.

An it seemed to work nicely with the Natural Earth datasets. 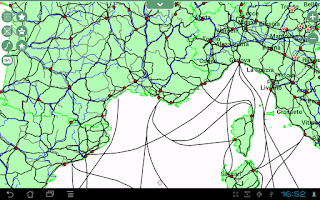 As a sidenote, since the map viewport in geopaparazzi is bound to use OSM mercator, Spatialite has to reproject the original dataset into that one.


This also produced a short developer tutorial which can be found here.


We tested this new spatialite enabled version on different devices and out in the Finnish flat/wetlands when checking back watershed boundaries extracted through the JGrasstools libraries (well, that will most probably be the next story). It works incredibly well even if it is not really optimized yet, which is why we decided to release it already.

This is how it looked like when we overlayed on a scanned Finnish orienteering map the results of our hydrologic/hydraulic study: old, new and extracted watershed boundaries and channel lines. 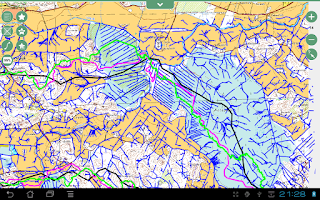 Ah yes, did you notice the new icon under the zoom buttons? That is a query button. Through that one you can draw query boxes on the map and the attrubutes of the intersecting features will pop-up: 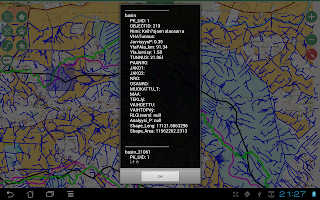 Well, this opens up a whole new world for geopaparazzi and mobile development in general. And it will even more when the rasterlite part of Spatialite will be supported for Android!

A big thank goes to Sandro for helping out optimising the spatial queries and for fostering the development through realtime support.

Sure, this is the major news here, but there is one more huge addition to this release. We now support reading of RFID tags through NFC and bluetooth devices. For this feature an activity has been exposed for developers, but normal users can access this feature simply through the forms: 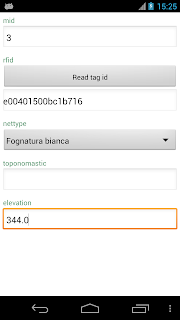 You can enable the tag reader widget and you will get a button, which, once pushed, will open this scanner activity: 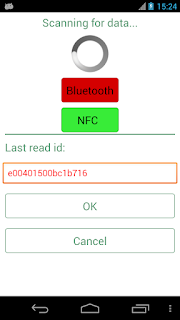 The nice thing about this is that it is able to scan tags both through NFC and a bluetooth device connected to geopaparazzi.
Once you see your tag id scanned, push ok and the form textfield will be filled with the tag id.

One downside of the addition of Spatialite to the game, is that adding the native libraries and necessary stuff, brought geopaparazzi from less than 2 megabytes to almost 9 megabytes. We figured that people would not care particularly, since the added value is huge.

Well, I think that is all for this release. Enjoy!

hi,it look great and i'm going to use it

can i extend your app?
i want create some forms with many fields and save data depend of map features